Kids and sleep is like the cat having a hairball on the carpet. It’s a problem everybody is likely to face eventually, nobody particularly likes dealing with it while it’s going on, everybody prefers to forget about it after it’s been dealt with, and it’s not particularly cool to be a person who writes about it on the internet.

Yet occasionally the pop culture God’s throw you a gift, like the latest book from Adam Mansbach and Ricardo Cortez called Go the F**k to Sleep. This book is probably the closest kid’s and sleep will EVER come to being COOL. It’s so cool it made it into the New Yorker and the Huffington Post. It’s so cool it’s currently the bestselling parenting book on Amazon and #2 bestselling book overall. It’s cool, funny, controversial, and profane.

Should You Buy It?

If the picture above makes you laugh then yes. It is funny, the pictures are great, and I think it’s a worthy investment of your $8 to get some parental catharsis in the form of a bestselling book. Sure you love them, yes they are a precious gift, but sometimes you just want them to go the F to sleep. I think my favorite part is the last page which goes:

[pullquote type=”2″]We’re finally watching our movie.
Popcorn’s in the oven. BEEP.
Oh shit. Goddamnit. You’ve got to be kidding.
Come on, go the f**k back to sleep.
[/pullquote] 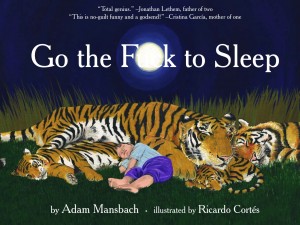 Well it’s clearly profane. And clearly I’m not bothered by this but you may be and that’s OK too. The most ardent critics seem bothered by the idea that there should be no profanity in a children’s book. Presumably they are concerned that given the label “children’s book”, some parents might overlook the profanity and actually read this book to their children. If you are reading this book to your children I would suggest that you probably have far bigger problems on your parenting plate than profanity.

One reviewer on Amazon had this to say: “No child should ever have to listen to this story. I would never read this to children.”

Hear hear. But I would send this to a friend. Because sometimes you need a good laugh. And to know you aren’t alone.

Did Somebody Say Samuel L. Jackson?

The cool quotient just hit factor 10 because Samuel L. Jackson has recorded Go the F**k to Sleep as an audio book. You can check out a video of Mr. Jackson making the recording or simply download a free mp3 (for a limited time) from Audible. This may be a more brilliant pairing than wine and cheese.