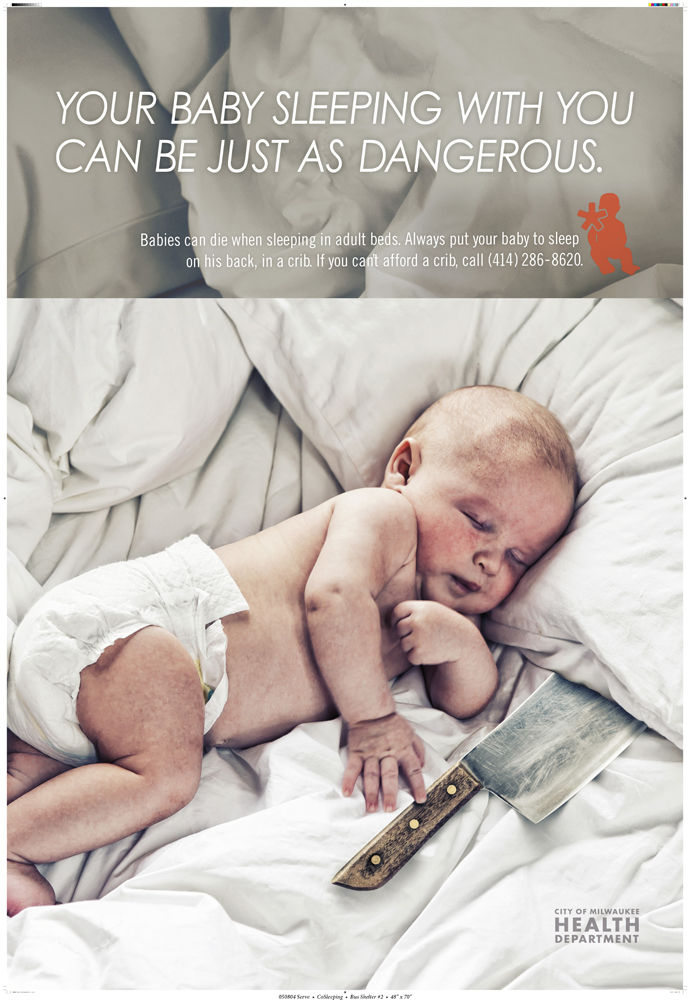 This is the latest safe-sleep ad campaign from the city officials of Milwaukee. You don’t need to be a rocket scientist to know that the blogsphere is going to blow up over this one. Although I do happen to BE a rocket scientist.

As a general rule I try to stay away from the co-sleeping yay or nay discussion mostly because I’m afraid that the pro-co-sleeping contingent will figure out where I live and then we will be forced to move. But to be clear, my official stance on co-sleeping is:
A) It’s OK if YOU’RE happy with it.
B) You’re willing to do it SAFELY.

As for the ad-campaign regardless of your opinion about it, you have to acknowledge that by any advertising measure it is immensely effective. It’s gone viral, it’s memorable, it’s thought-provoking, and it may just be shocking enough to get people to change their behavior (time will tell.)

But nobody is talking about its merits as a marketing tool because we’ll be so busy arguing about the anti-co-sleeping message.

But let’s put that aside for a second and reflect on some horrifying facts here.

[pullquote type=”2″]
Thus a baby born in Milwaukee is over 3X more likely to succumb to SIDS than an average American baby.
[/pullquote]

So before we get all high and mighty on our Pro Dr. Sears Attachment Parenting horses, take a minute to consider what a catastrophic problem Milwaukee families, healthcare providers, and government officials are facing. The stories and statistics of loss are staggering. And the experts THERE believe that unsafe bedsharing is a significant problem. This is not an advertisement for AMERICA, it’s for MILWAUKEE.

Clearly the much bigger problem in Milwaukee is premature birth which is linked to poverty and the unavailability of affordable prenatal care. This is a billion dollar problem that will take time and money to tackle (and I’m guessing Milwaukee has neither). So the city health officials are targeting the #2 contributor to infant mortality via making safer sleeping choices because it doesn’t cost the city scarce tax dollars. Does this make them villains or just practical?

Oh I know, there are going to be million posts published tomorrow decrying the ad-campaign and raising the “Yay Co-Sleeping” battle cry. And by coming out in support of this campaign I risk being ostracized by friends and neighbors alike (Vermont is mecca for attachment parenting types). But here is the ugly co-sleeping truth that nobody wants to cop to:

So there are a whole bunch of people who right off the bat should never ever co-sleep. And my guess is that the people in Milwaukee who this ad campaign is targeting (due to high premature birth rates, drug use, alcohol abuse, etc.) are probably in large part people who should not be co-sleeping for exactly the reasons listed above. Also please note that the fine print suggests that you should call for help if you can’t afford a crib. Why? Because part of the problem in Milwaukee is that families can’t afford a crib and are putting their baby to sleep on the couch. And it ends badly.

Wouldn’t it be great if instead of this being about co-sleeping it raised awareness about the plight of underprivileged parents in poor cities? The desperate need for quality prenatal care? Wouldn’t it be great if maybe this led to increased Federal funding or even private donations to clinics and other worthy organizations? Yeah it would be. But it won’t.

But I bet their Ad Agency is going to win a bunch of awards for it. So there’s that.

Is Cry it Out the Answer? »
« Are You Making these Baby Sleep Mistakes?