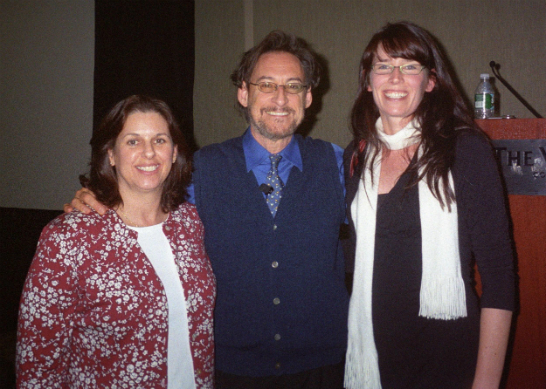 This post (which I’m leaving in it’s original form) was written in 2013. Both Dr. Karp and I have moved on from our original stance on swings and safe sleep. Neither of us recommends infant swings at all anymore. Science has moved on and so have we. If you’re struggling with newborn sleep (which is a HARD TIME) focus on establishing a consistent bedtime and independent sleep. For the most up to date resource on safe and effective way to help your child sleep through the night check out the Precious Little Sleep Book. Once you have the book you are also welcome to join the free Facebook Group which is an enormously helpful source of support and troubleshooting.

Most of you know who Dr. Karp is. If you don’t? Well he’s awesome. And frankly the fact that he’s awesome probably trumps the fact that he’s a fellow with the American Academy of Pediatrics, is a USC professor, and a best-selling author. Further, as you can see from the picture above we’re practically BFFs (there is a small chance that I’m overstating that fact and this may simply be a photograph taken after he spoke at a conference). Most of you know him from his great Happiest Baby DVD. I’m hoping to make sure you know him because of the great book The Happiest Baby Guide to Great Sleep (available in paperback on March 19th – WOO HOO!).

Seriously peeps, this book is right up there with Ferber and Weissbluth in the “must buy” category.

Anyhoo for a wide variety of reasons Dr. Karp is an all around cool guy. He was catapulted into the category of uber-cool when he agreed to an interview by Skype where I could pepper with him with questions about swaddle-hating babies, pacifier problems, baby swings, the eat-play-sleep method, and a whole slew of other things.

However since apparently nobody will watch a YouTube video longer than 3 minutes (this is internet law, right up there with thou shalt not seek baby help on Yahoo Answers) I’m breaking our interview into small chunks and will be posting them here in a series. There is a lot of fantastic baby sleep insights here and I encourage you to subscribe to my newsletter (over there on the right) so you’ll know when everything gets posted.

[NOTE: This IS Dr. Karp although he looks like he’s speaking to me via the witness protection program which has blurred his face to keep his identity a secret. Sadly it’s just a poor internet connection. But you can hear what he’s saying and that’s the important part right? RIGHT?!?]

If you aren’t familiar with Dr. Karp then start here with a brief introduction on why I love him so.

I’ve been pretty clear in my support for baby swings as a powerful sleep aid. Clearly not ALL babies need the swing but lots of newborns do well in them and plenty of older babies nap like champions in a good baby swing.

But invariably the question comes up – is it safe? Clearly the AAP recommendation is that babies sleep in their cribs at all times. And certainly the goal is that eventually your baby will be happily sleeping in the crib too. And for this reason I always suggest you run the idea of your baby sleeping in the swing by your own beloved pediatrician.

Dr. Karp has also long been a proponent of baby swings. He talks about the power of motion for baby soothing. But what about the safety issue for sleep? I asked Dr. Karp this question, check out the video to see what he had to say about it.

I’ve got more great stuff with Dr. Karp you won’t want to miss out on. Subscribe to my newsletter and I’ll let you know when it’s available. Next up how to get out of reinserting the paci all night long!

Anybody relieved to have a pediatric celebrity back up your decision to let baby nap in the swing? Excited by the prospect of video content (yay or nay on the video stuff)? This is all new ground for me and I welcome your thoughts!