Is Your Crib as Safe as You Think? 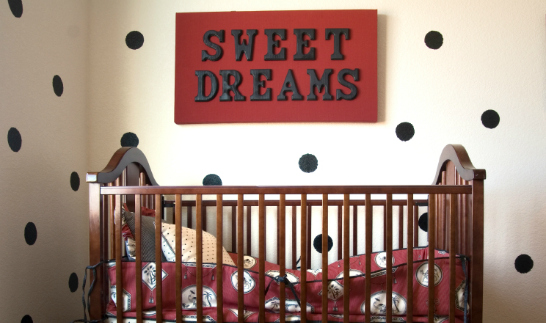 Most of you feel like you’re never going to get your baby to sleep in a crib. Which is probably OK as most cribs are all that aren’t safe anyway. That’s right, I said it. And while the recent kickup about how co-sleeping is a SIDS risk is putting all the emphasis on the hazards of adult beds, there’s plenty of safety hazards in cribs too.

The world is full of smart caring parents putting unsafe things in their baby’s cribs or putting them down to sleep on their tummies. Most of them don’t even realize it’s a problem as the world is also full of pictures modeling an unsafe sleep environments. A Pediatrics study looked at magazine photos of sleeping babies finding that only 36% of them modeled safe sleep environments consistent with the AAP.
[pullquote type=”1″ ]
In the AAP study, 64% of photos of babies in a crib showed them sleeping face down.
[/pullquote]

And Pinterest is like the rogues gallery of unsafe crib environments. Even the baby cakes on Pinterest model unsafe sleep for babies. Also? Edible cake babies are creepy.

As somebody who blogs about kids and sleep I try to make sure I only use photos that model safe sleep habits. Sadly this makes getting cool pictures almost impossible. Because almost everything you find on stock photography sites features cribs with potential SIDS hazards in them.

Don’t Believe Me? I’ve Got Proof!

To demonstrate I’ve pulled some pictures from popular stock photography sites. No I didn’t dig into the bowels of search results to find these. These are all from page #1 people. 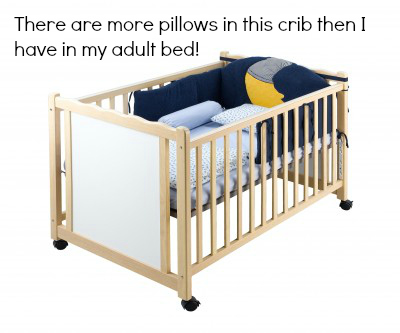 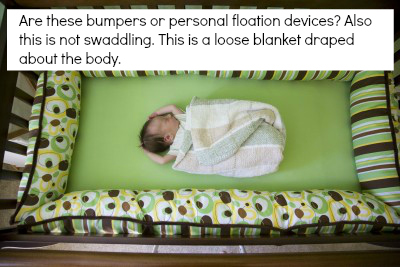 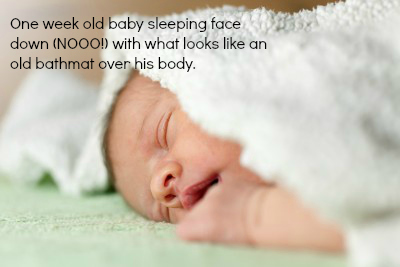 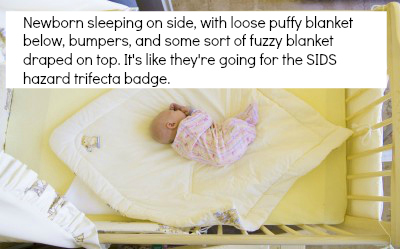 So it’s hard to know that there is a problem with your crib setup when the world is full of pictures modeling unsafe sleep. According to the AAP Safe Sleep position your crib should be safe, dark, and dull. That’s it. 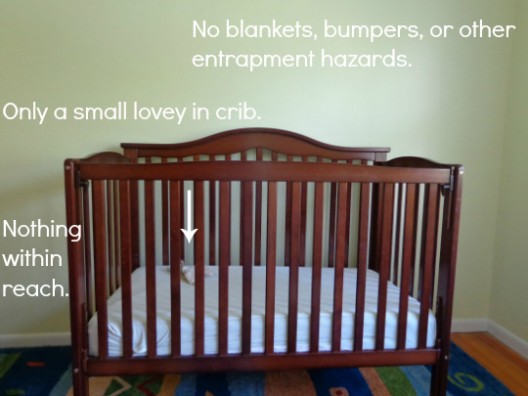 To be clear what it looked like when my 3 year old was sleeping in it was more like this. Which is totally fine when they’re 3. Not so much when they’re babies. 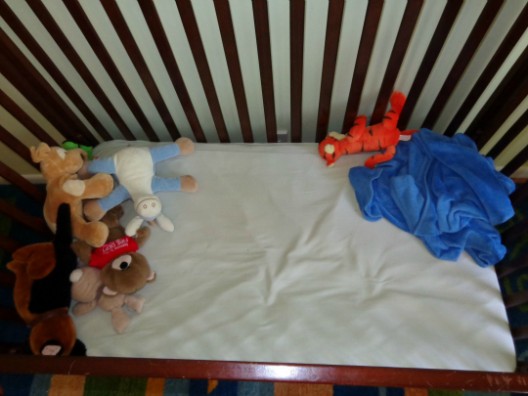 Look, I get that decorating baby rooms is really fun. And honestly it’s the last decorating you’ll get to do until they’re 10 because it’s almost impossible to fix up your house when there are small children living in it. But let’s keep the emphasis on decorating around the crib, instead of in the crib.

In closing I wanted to share a few personal pet peeves when it comes to cribs, sleep, and safety.

Anybody else have any pet peeves they want to share? Examples of safety hazards you were given as shower gifts? Observations on my appalling lack of photographic skills?
[mailchimpsf_form]

Who Else Wants to Know the Best Time for CIO? »
« Everything You Ever Hoped to Know About Swaddle Blankets