Swaddling is Terrible, According to Science 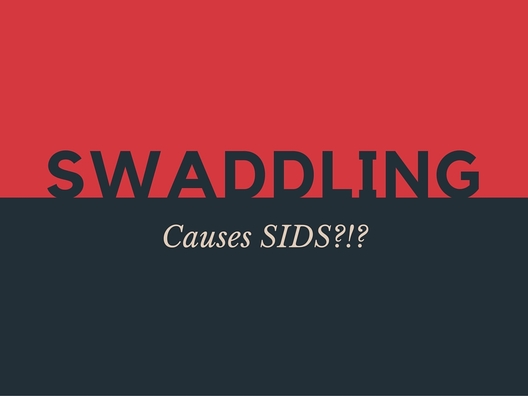 The Journal of Pediatrics published a new study investigating the possible relationship between swaddling and SIDS (Sudden Infant Death Syndrome). The study concludes, “These analyses indicate that the current advice to avoid placing infants on their front or side to sleep may especially apply to infants who are swaddled.”

Is this news? Not really. Sleeping face down (aka prone) while swaddled has previously been linked to a significant increase in the incidence of SIDS. Which is why parents must immediately stop swaddling as soon as their baby shows signs of being able to flip from back to stomach. Even if their child’s sleep goes immediately to crap. Even if tears are involved.

But based on the media coverage you would think that the study proves that swaddling is only slightly less dangerous than putting your child to sleep in a box of glass surrounded by angry pitt vipers.

The Washington Post shares, “Risk of SIDS death … was still greater among swaddled babies, compared to those who were not swaddled.”

According to the New York Times, “Over all, swaddling increased the risk for SIDS by about one-third.”

Well hard pass on swaddling then.

Sure, swaddling helps newborns sleep better and longer. And previous scientific overviews on swaddling suggested that it was beneficial as long as baby’s hips were loose and the baby was on it’s back. But if it increases the risk of death by 33% nobody should ever swaddle their child. Ever.

News You Can Trust

Fundamentally this is an issue about how the news reports on studies. Because parents of young children don’t have the time to dig into study methodology so they rely on trusted news outlets to break it down for them. To provide them with key insights they can use to make informed parenting decisions. But sadly that rarely happens.

I would get a bit ranty about this. But I don’t have to. Because John Oliver did a bangup job. Plus he’s adorable (check out those dimples!).

This happens ALL. THE. TIME.

Take a reasonable and nuanced piece of research and turn it into clickbait. Yahoo News and Psychology Today are two of the worst perpetrators, but Time, CNN, Huffington Post, and the NYT also do this.

Welcome to the Internet people.

Does Swaddling Increase the Risk of SIDS by One-Third?

Digging Into the Swaddling SIDS Study

This study is a meta analysis which is useful because it summarizes, collectively, what existing research says on a given subject. This is a good thing to do, because when you combine the data across multiple studies, you get a bigger sample pool to draw conclusions from. This is especially important when looking at SIDS because most individual studies have a relatively small sample size. And SIDS is, clearly, something we want to understand better.

However there are a number of glaring issues with the data that make it unreasonable to draw sweeping conclusions from the study.

None of the studies give a precise definition of swaddling, which in some studies was described as “infant wrapped in a sheet or light blanket.” This could mean the child was indeed swaddled or was simply put down for sleep with loose blankets (a known SIDS hazard). Thus we can’t draw broad assumptions about swaddling because the infants in the study may not have actually been swaddled.

The prevalence of swaddling is inconsistent across the four studies (ranging from 35.7% to 9.2%) and the SIDS group was almost 60% more likely to be swaddled than the control group (to be clear, there are swaddled babies in both groups). You might see this and jump to the conclusion that swaddling most definitely causes SIDS but a more accurate interpretation is that this is evidence that study and control group are not homogeneous, a crucial issue when comparing two groups.

The issue of heterogeneity comes up again resulting in the most recent UK study being excluded from further analysis. If we look at the odds ratios of the three remaining we see 2 straddling the bar (the bar represents an OR = 1, meaning that swaddling has no effect) with 1 study with a much higher range of values for the odds ratio. 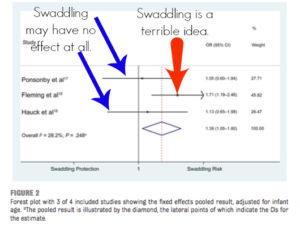 I can’t find this Fleming study but it’s based on data comes from the Chicago Infant Mortality Study which looked at SIDS and racial disparity and the data specifically looked at kids who were at much higher risk for SIDS: 90% were nonwhite, 50% had mothers who smoked while pregnant, 50% were sleeping on soft-bedding, and 80% had never been breastfed. This data doesn’t represent the average average, but instead reflects high-risk infants who were far more likely to succumb to SIDS due to issues related to race, maternal smoking, lack of breastfeeding, unsafe sleep space, etc. irregardless of swaddling. And it’s the data from this study that makes up the bulk of the pooled data in the meta analysis, so it’s entirely possible that the results presented have nothing to do with swaddling and everything to do with the high-risk profile of the babies studied.

The most interesting part of this study is comparing the infant’s sleep position looking at at supine (sleeping on back), side, and prone (sleeping on belly), which confirms what has been suggested by previous research, that tummy sleeping while swaddled is enormously risky.

But we can’t draw sweeping conclusions from this data because of:
[list type=”checklist”]

[/list]
Additionally, when looking at the final sleep position (back, side, tummy) we have very small sample sets to work from. The authors draw the conclusions that for prone sleep while swaddled “the risk was 19-fold” from a scant 5 cases.

Similarly there are only 38 cases of SIDS for babies who are swaddled and back sleeping. This is an extremely small data set to draw broad conclusions like “swaddling kills” from. Especially given that previous studies suggesting that swaddling might in fact, reduce the incidence of SIDS.

Which is likely why the authors DON’T say that swaddling causes SIDS. They DO point out that older babies are more likely to flip and thus suggest that weaning off swaddling earlier than 4-6 months might be wise. And it’s notable that of the 38 infants placed on their back to sleep swaddled, 7 of those who were lost to SIDS had managed to flip onto their tummy during the night.

Bottom Line on Swaddling and SIDS

And that, realistically, is the bottom line from all this bruhaha. Never place your child on their tummy while swaddled. And as your child gets older and stronger, you need to keep an eye out to ensure that you wean them off swaddling before they figure out how to flip over. The minute you see your baby starting to push up onto their side or make other moves towards flipping, the swaddle must go. Even if your solid night sleep goes with it.

And if you see headlines popping up that seem overly alarming or contrary to common sense, chances are that the “new study says” something entirely different from what’s being reported. 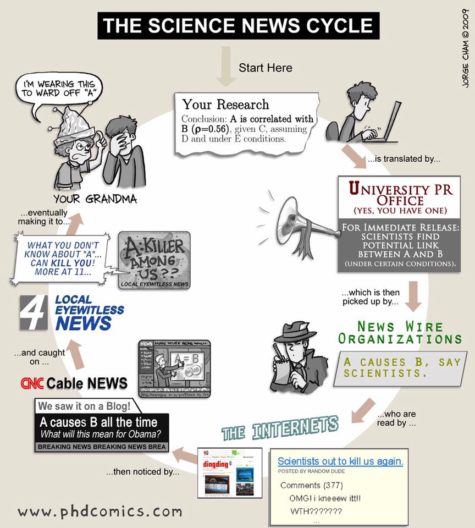 Introducing the PLS Parenting Podcast! EP 1 »
« What Other Parents Say About Sleep Training